Hotaru has beige hair and emerald green eyes. Due to her short hair and boy themed clothing, she is often mistaken as a male (including her teammates).

Hotaru is the Student Council President, and is known for her brute strength, good reflexes and a strong sense of Justice. She claims to not let "evil doers" get away with their evil deeds, and is often noted to enjoy picking fights for the sake of what's correct to the point where she beats up a bunch of students who were extorting money from a helpless student and desires for revenge on learning that Kanae Yajima (Hotaru's best friend) was conned by a Host. Hotaru has a cheerful and an energetic personality and is always helpful to others in need. She is often mistaken as a guy due to her appearance. Despite having a strong sense of justice, once she decides upon something, she doesn't back off easily and will do anything to achieve that goal, even if it means lying to her fellow teammates. She is next door neighbor's with Masamune Matsuoka, Haruki Hosokawa and Tooru Yukimura.

"I never thought about winning making me cool, or losing making me uncool. But you're right. If anything... Giving up before you even try is kind of uncool. That's why I want to be someone who'll fight as many times as it takes, and never give up. That's gotta be way more cooler." - Hotaru to Kanae Yajima

"I may not be able to beat you, even if we play a hundred more games. But if I have a chance of beating you the 101st time, I'll challenge you again and again." - Hotaru to Masamune Matsuoka

"I won't forgive any evil deeds" - Hotaru to Kanae 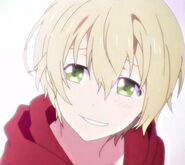 Add a photo to this gallery
Retrieved from "https://aoharu-x-kikanju.fandom.com/wiki/Hotaru_Tachibana?oldid=4580"
Community content is available under CC-BY-SA unless otherwise noted.